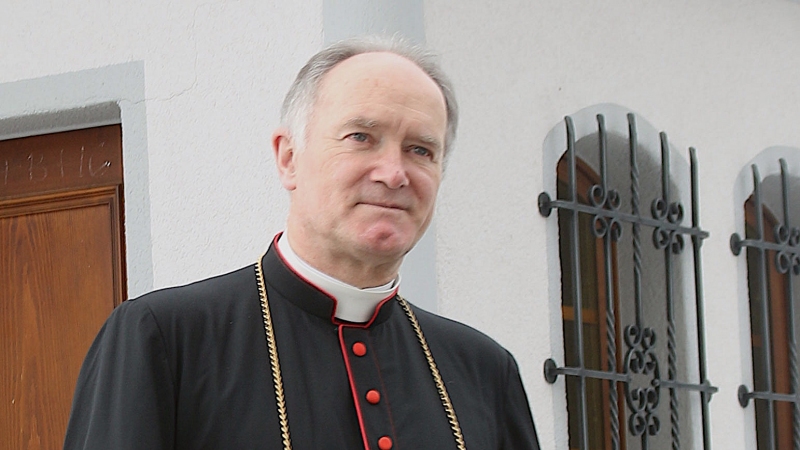 Bishop Bernard Fellay, Superior General of the Society of Saint Pius X shows: The links among the revolt of Luther, the Bolshevik Revolution and the miracle of Fatima: Liberal laxity and state communism/socialism. The great anti-Christian persecutions carried out by the Communists had been announced by Our Lady at Fatima and she gives us the supernatural remedy to these evils.

During the month of October 2017, three anniversaries were observed which determined the course of human history and Church history: Luther’s rebellion, the Bolshevik Revolution and the miracle of Fatima.

One hundred years ago, a few days earlier, on October 13, the Immaculate Heart sealed with a spectacular miracle her message announcing great future events of the Church and of the world, some of which now belong to the past, like World War II, while others have not yet taken place, like the triumph of the Immaculate Heart and the conversion of Russia.

The reformation launched by Luther appears at first glance to have been a religious event. And certainly the German heresiarch disrupted the Catholic Church to its foundations, attacking the papacy, Holy Mass, the priesthood, and the Holy Eucharist.... The Faith and the means given by God to mankind to obtain eternal salvation for them were rejected or profoundly falsified.

Yet given the undeniable connections between the supernatural order of the Church and grace, on the one hand, and the temporal order of human governments and civil society, on the other hand, very quickly the rebellion against the Church extended to human society, dividing Europe to this day, inaugurating centuries of persecution against the Church in the Reformed countries, and leaving all over Europe the marks of terrible wars, the most painful of which was the Thirty Years War. Truly we are totally baffled when we see Catholic prelates today commemorating and even celebrating this event, which was so sad and so terrible for Christendom.

Luther’s rebellion was based on a principle that is so to speak the foundation of modern thought and governs all of contemporary society, whether it claims to be liberal or socialist-communist. This principle aims to liberate men from their dependence on God and the order established by Him, both on the natural and the on the supernatural level.

However, in the depths of man’s nature there is the ontological reality of total dependence upon his Creator—total because there is no sphere in which a human being could escape from it. The very notion of creation clearly indicates this. And for the creature’s part, this objective dependence immediately gives rise to the duty of an equally absolute submission to his Creator, who is God. This submission extends to much more than what appears to men to be its most common expression: obedience to God’s commandments, moral obedience. It extends also to the order of the intellect, to our knowledge. This is the submission of our reason to reality that imposes itself on us, in such a way that the exact definition of truth is “the adherence of the intellect to reality”, to objective reality. The same path is followed in the domain of faith, although the reason for this submission is different in that case. Whereas our natural reason submits to the light of the evidence, supernatural faith submits to the authority of God, the Truth who reveals Himself without deceiving us or being deceived, as we say in the Act of Faith.

Luther, through the principle of “private interpretation” or “free thinking” [liberum examen], destroyed that submission. Ever since then, the slogan resounding throughout the world has been the cry: “liberty”: actually, rebellion against God and the order of things willed by God. This modern liberty flatters the soul, which ever since original sin has been fallen. It is the temptation of the present age; it is an illusion. It is a fanciful dream, the one that inspired the sin of the archangel Lucifer and of all sins after it. This so-called liberation ends very badly, and ultimately it does not have very much to do with true freedom. For if man was created free, it was not so that he can rebel against God, his final end, his supreme good, but rather so that he can choose by himself the means that will lead him to God; thus merit is involved in the process of obtaining the eternal happiness that Almighty God wants to share with His creatures.

How few men and women there are today, immersed as they are in this liberal atmosphere, who understand these truths, which are nonetheless fundamental!

The unmistakable excesses of liberalism taken to its logical conclusion, whether it be anarchy or the tyranny of a materialist government, just like the excesses of socialism and Communism, which in their horrible fanaticism left tragic scars on the twentieth century with at least two hundred fifty million dead, do not seem to make our contemporaries reflect.

The Russian Revolution started with this rebellion against the yoke of the temporal power, but its origin was not Russian. It was found in Western Europe. Karl Marx was German; Russia would be the testing ground of the principles elaborated by the German Marx, with the financial support of Western business interests, according to some historians. Nevertheless, the Revolution would very quickly attack religion. And Communism would always see in the Catholic Church more than in any other a sworn enemy to destroy, if at all possible. From Communism came the greatest of all persecutions against the Church, which still continues today in China, North Korea, and Vietnam.

All this was foretold in Fatima, where Our Lady asked the religious authorities and every Christian to perform very simple acts in order to ward off these evils that threatened to swoop down on the earth: devotion to her Immaculate Heart, the Five First Saturdays of the month in reparation to the outrages committed against the Mother of God, and the consecration of Russia.

There is a striking disproportion between the means proposed by Heaven to remedy the ills of humanity and the tragic destiny of the nations at this moment in the history of humanity. But Almighty God, who is infinitely above all human turmoil, has no need of human means. For Him, one word suffices to create the universe, to regenerate it, to save it. But that will happen only through human beings who have finally acknowledged His sovereignty. “The war will end, but if men do not stop offending God, an even worse one will begin during the reign of Pius XI.” “If people heed my requests, Russia will be converted and there will be peace; if not, she will spread her errors throughout the world, starting wars and persecutions against the Church.” The peace of the world—and of the Church—is bound up with the consecration of Russia to the Immaculate Heart of Mary. According to an unquestionable testimony that was reported to me personally, Sister Lucia, shortly before her death, told a priest that “the consecration of Russia WILL BE MADE, but it will be very difficult.”

The triumph of the Immaculate Heart of Mary will come, we have no doubt about that, but at the moment the battle is raging, and this time even within the Church. The pillars of our faith that seemed unshakable tremble on their foundations; some bishops and some cardinals go farther than their new schoolmaster, Luther, and celebrate the anniversary of his rebellion this year. There are very few who defend revealed truth. The voice on which everything depends in the Church on earth is resolutely silent. It is allowing the darkness of doctrinal and moral confusion to invade the City of God.

On December 7, 1968, only three years after the conclusion of the Council, Paul VI had to admit: “The Church is going through a time of uncertainty, self-criticism, one could even say self-destruction.” On June 29, 1972, he remarked that “through some crack the smoke of Satan [had] entered the Church: doubt, uncertainty, problems, worry, confrontation.” Today it is no longer a wisp of smoke, it is the thick, billowing smoke of a volcanic eruption. St. Pius X had already declared: “When all this is considered there is good reason to fear lest this great perversity may be as it were a foretaste, and perhaps the beginning of those evils which are reserved for the last days; and that there may be already in the world the ‘Son of Perdition’ of whom the Apostle speaks (2 Thessalonians 2:3).” (From the Encyclical E Supremi Apostolatus dated October 4, 1903). What can be said, one hundred years later, at the sight of the Church disintegrating bit by bit? Our blood is chilled when we hear that same voice say, during the press conference on the airplane returning from Armenia on June 26, 2016, that Luther had not erred on the subject of justification: “I think that Martin Luther’s intentions were not wrong: he was a reformer....And today, Lutherans and Catholics, with all the Protestants, we agree about the doctrine of justification: on this very important point he (Luther) had not been mistaken.”

Thus, we have no other plans for the Society of St. Pius X, for you, dear faithful, except to continue what Holy Church has always done, whatever may happen. The way of truth which has made saints in every age will always remain the sure path to Heaven, the path of the Gospels, in imitation of Our Lord and Our Lady. We use the means shown to us by Heaven, with the certainty that we cannot do any better. Our Rosary Crusade officially ended on August 22 of this year; nevertheless we beg and ask you insistently to keep up the good habits that you have formed: praying the Rosary, those little sacrifices which are so pleasing to God and which have the power to save souls for eternity, provided that we put into them a seed of love for Our Dear Lord!

At the end of this year in which we celebrate the centenary of the apparitions in Fatima, let us remember the lessons and the requests of Mary, the ever-Virgin Mother of God. According to her own words, her Heart will be our refuge and the path that leads to God. We live by this hope, without becoming discouraged by the terrible events that surround us, well aware that all of us can and must do much good for our contemporaries by faithfully preserving the treasures of Tradition.

Accept our heartfelt thanks for your untiring generosity. May God reward you with His graces and bless you, while you await the triumph of the Immaculate Heart of Mary.

Menzingen, November 21, 2017, on the Feast of the Presentation of the Blessed Virgin Mary

Get to know Archbishop Lefebvre, visit the website marcellefebvre.info

The news site of the SSPX